What is Misfits Market + My Honest Review

SaveSavedRemoved 4
2447 Views 2 comments
This post contains affiliate links where I will earn a commission if you make a purchase. Please read my disclosure policy here.

What is Misfits Market?

Have you heard of Misfits Market? A reader mentioned receiving her Misfits box in one of my Facebook groups, so I asked for more information on it.  I decided I would give it a try, after reading what she had to say as well as researching online.  I was very impressed by the company’s mission and excited to hop on board. So I signed up for my first box and I will share my honest review in this post.

Here is a brief history of how the company got its start before I continue with my review of the product,

How Misfits Market Got Started

Almost a billion people globally are either starving or malnourished.  Even more disturbing is that over $1 trillion worth of food is wasted annually, much of it not being sold only to rot in stores and warehouses, or being thrown out by farmers because produce is “ugly”, misshapen, or the wrong size.

Modern-day beauty standards for food create much of this unnecessary waste.  This ugly food could feed some of the starving population out there.

These shocking facts are what inspired Misfits Market to come up with a mission to help reduce food waste.

What Misfits Market is

Misfits Market is a produce based box subscription, where food deemed too ugly to sell is instead packaged up and sent out to members, at a fraction of the cost you would pay at the grocery store!  All food is organic and comes from local farms. Their mission is to make healthy food not only affordable but to prevent it from being wasted.

I have been subscribing to Misfits Market for a month now on a bi-weekly plan.  I have received 2 boxes as of this writing with my third expected this coming Saturday.  I am already looking forward to receiving it!

Want to sign up for Misfits Market too?  Use my referral code COOKWME-TH4OSJ on your to save 25% off your first shipment! 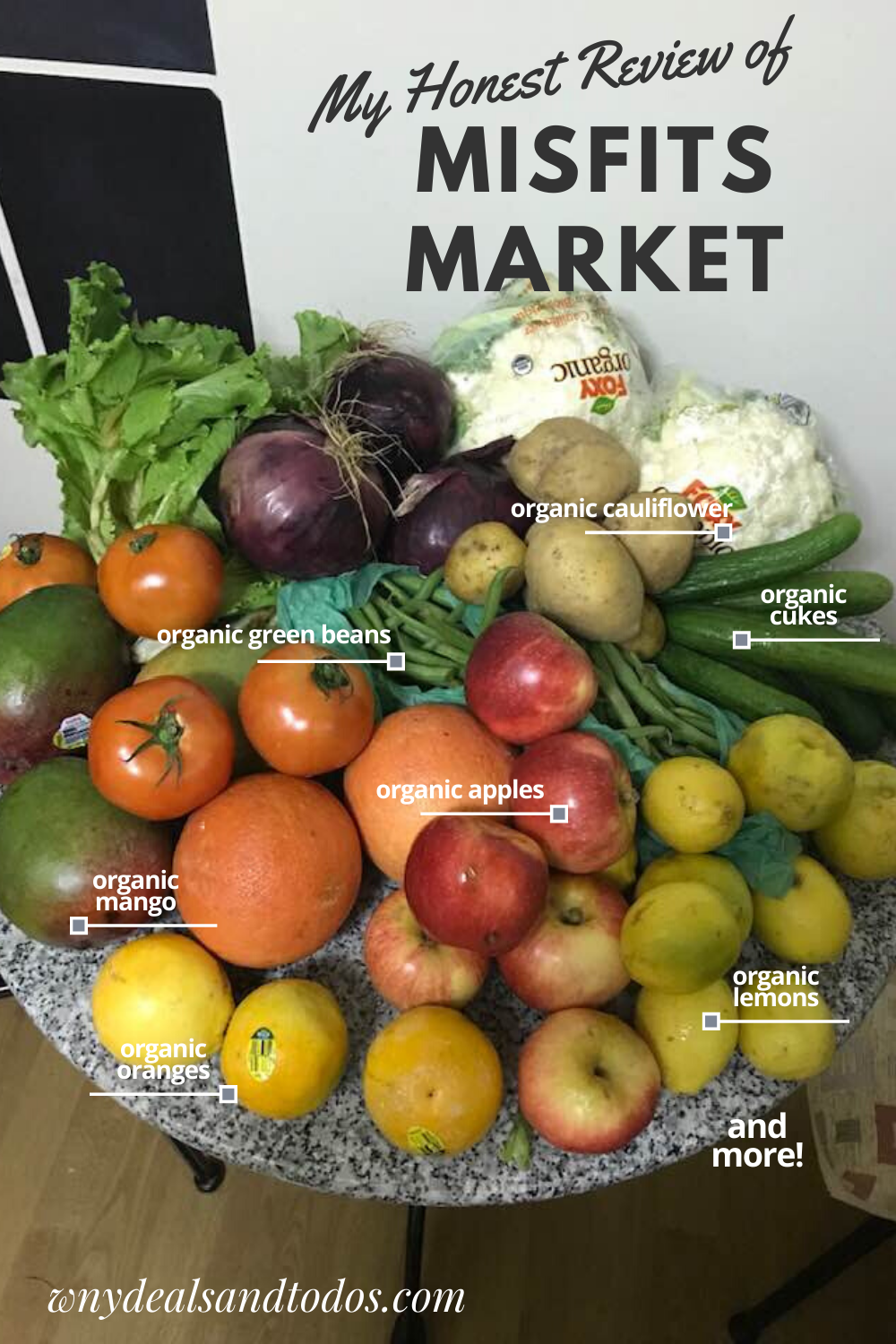 The first box I ordered was the “mischief” (smaller) size, as I wasn’t sure what to expect.  This starter box costs $19, comes with 10 to 12 pounds of organic mixed fruits and veggies, and retails around $35 – $40. It is the perfect size to serve 1 to 2 people for one week.

My first box did not take long to arrive.  I received notification of shipment and the package was at my doorstep the next day.  My kids excitedly helped me go through the contents of the well-packaged box.  Here is a picture of all we received that week: 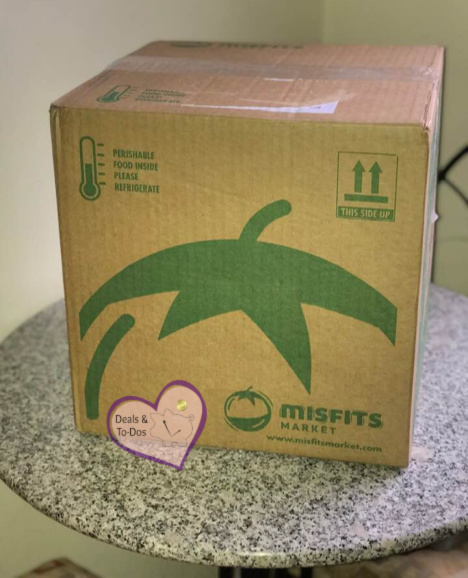 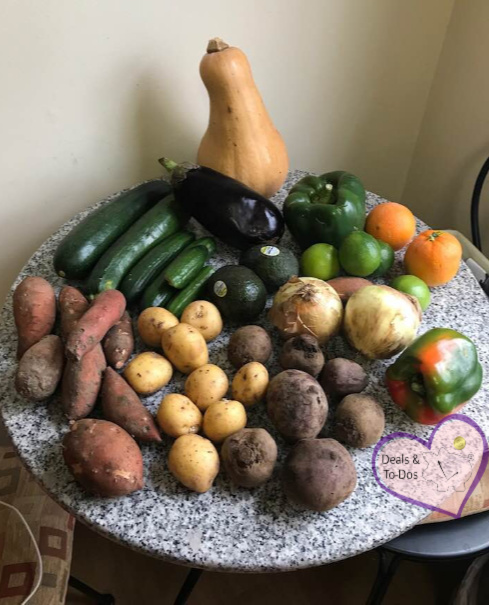 I was so impressed with the contents, much of which didn’t look ugly to me one bit! Maybe I’m not as picky as “typical” shoppers but in all honesty, I would have bought much of this at the supermarket.

If I had to pick one disappointment…

I was probably most disappointed in the eggplant, as it is my least favorite, but my husband loves it.  I never buy eggplant, so it was probably his favorite thing to see in the box.  🤣

The cucumbers, oranges, avocados and green/orange peppers we snacked on throughout the week.  One day I used the limes to make fresh limeade. I used yellow potatoes for dinner one night.  I made homemade sweet potato chips and beet chips for a movie snack. 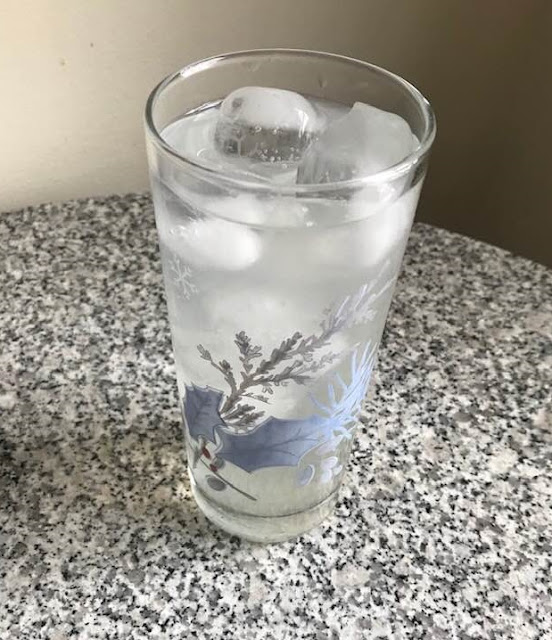 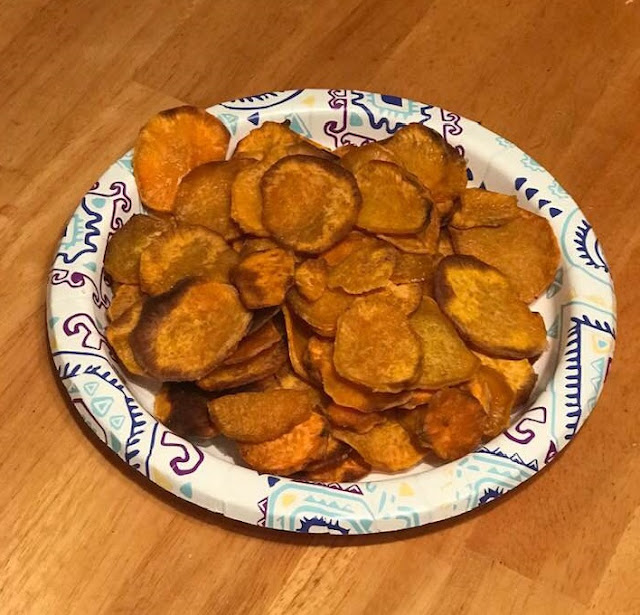 I peeled, cut up, and froze the two onions for future use.  The zucchini I used to make 6 loaves of bread.  I cut up the butternut squash, boiled and scooped into a glass baking dish, added butter, brown sugar, and cinnamon.  Then popped that in the freezer for a future side dish. 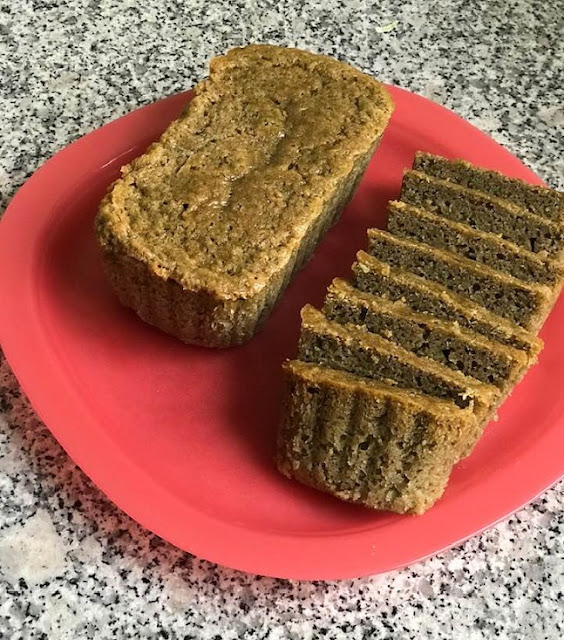 Finally that eggplant.  Well, I Googled some recipes and found this Turkish Eggplant Casserole. My husband loved it and I will admit that I ate 1/4 of it. 😉 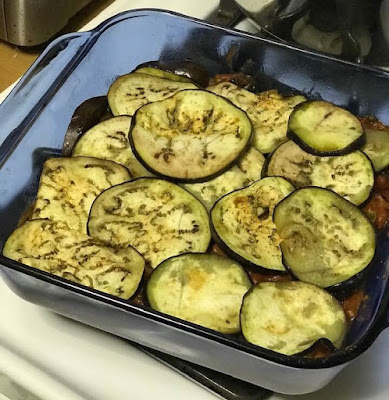 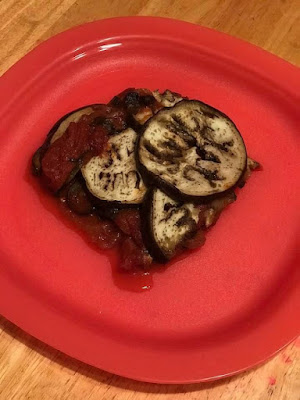 I was so happy with the first box that for my next delivery I upgraded to the larger “madness” box.  This larger size costs $34, comes with 18 to 20 pounds of organic mixed fruits and veggies, and retails around $65 – $70. It is the perfect size to serve 4 to 5 people for one week.

Again my kids and I excitedly opened this much larger box and were completely impressed by not only the quantity but the quality too! 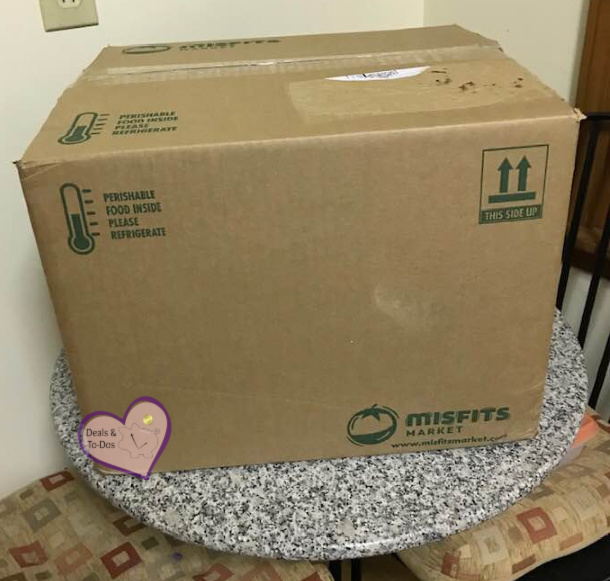 Here is what we received in the madness box: 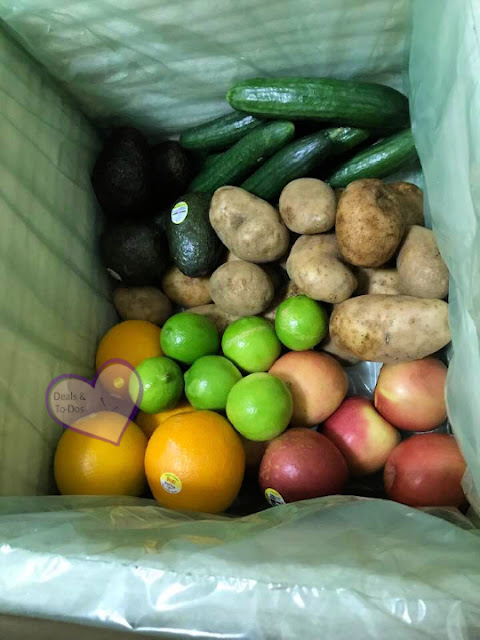 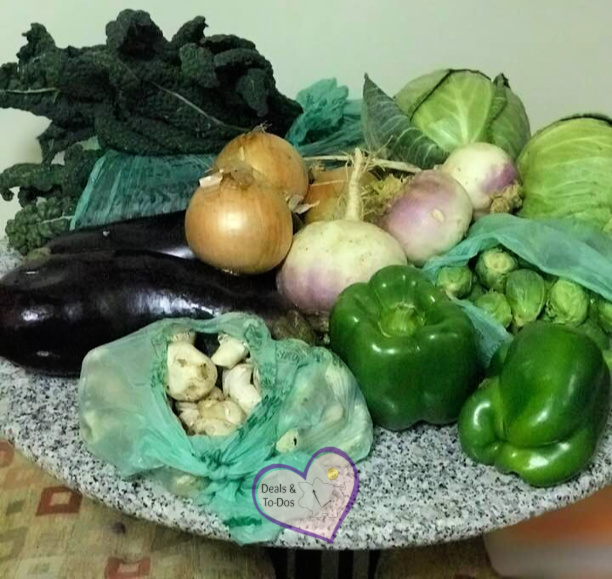 This time we had much more to go through, so I quickly got to work figuring out what I was going to do with everything!

The oranges (4), apples (6), cucumbers (8), and avocados (4) we snacked on throughout the week.  I used the limes (8) to make more limeade but this time after I squeezed out the juice I used each lime half to help me clean my kitchen sink and stovetop.  The citric acid in the pulp is an excellent way to break down hard-to-scrub areas.

I used one head of cabbage and half the potatoes for corned beef & cabbage, which ended up perfect being so close to St. Patrick’s Day. The second cabbage I cooked, cut up and froze for a future side. 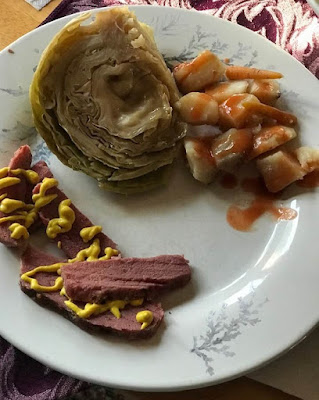 While I was not sure what to do with the 3 turnips, ultimately I decided to peel, cube, and roast one of them along with some chopped onion.  This dish was a very tasty mixture but I decided to save the rest to later add to soup. 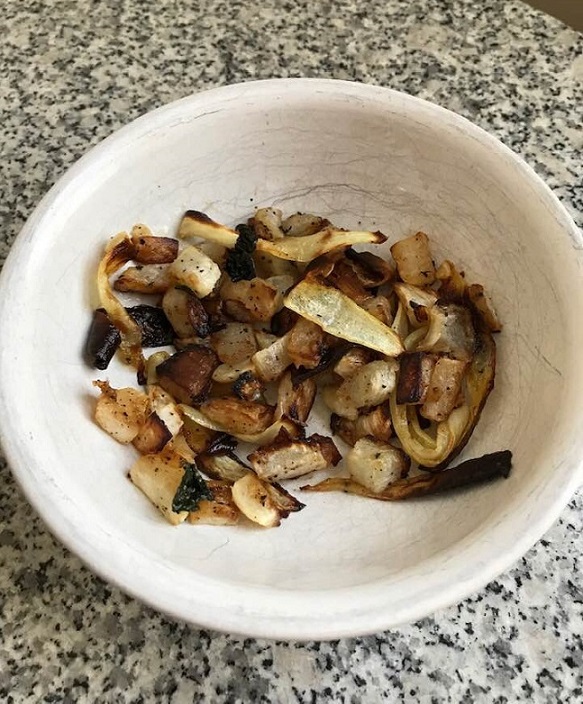 I also received 2 large bunches of kale.  When I posed the question to my Facebook page on what to do with kale, I received several great (and funny) responses!

One thing I decided to try was using it in a white bean soup. I happened to have a Jennie-O turkey burger leftover in the fridge that I cut up and added to the pot (substituting it for sausage as I didn’t have any).  Then I added the fried onions & turnip, ripped up raw kale leaves, added a can of Bush’s Beans White chili beans, a smaller carton of chicken broth, a can of Campbell’s condensed cream of chicken soup and a can of skim milk.  I mixed everything and cooked as a soup, which ended up being so delicious! 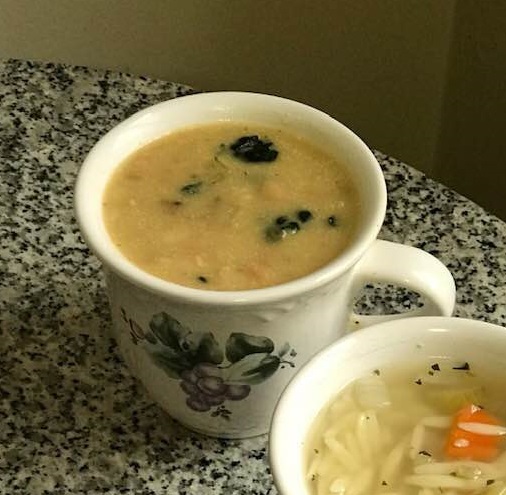 I also used half a bunch to make kale chips as suggested by some readers.  The remaining bunch I ripped up into pieces, then froze to use for future soups & stews. 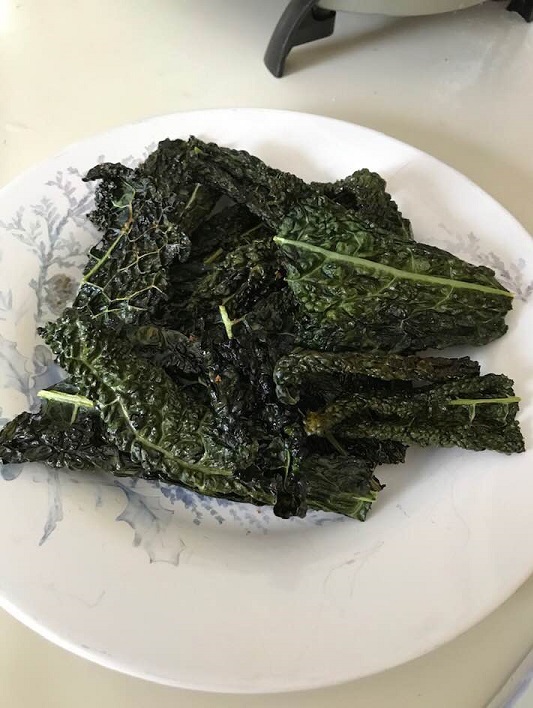 There was a nice size bag of Brussel sprouts, which happens to be my daughter’s favorite.  I ended up cutting them in half, coating with olive oil, salt, pepper, and Parmesan, and roasting in the oven.  They were amazing!

I also received a good amount of mushrooms.  Half of the mushrooms I ended up using in a salad and the other half I made stuffed mushrooms with.

Oh almost forgot.  This time I received 2 eggplants.  Yay me. So again not knowing what to do with them, I cut both into thick slices, coated each in egg, then dipped in breadcrumbs.  I fried each slice until golden.  I then used half of the slices to make eggplant Parmesan.

The other half I froze, layering with wax paper in between each slice so they didn’t stick.  My plan for those is to make eggplants sandwiches one night.  I also froze the eggplant Parmesan and that reminds me I promised I would make it for my hubby this week.  I have to make sure I do that! 😀 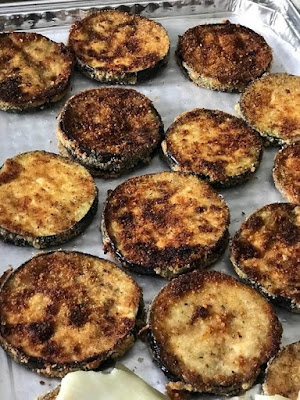 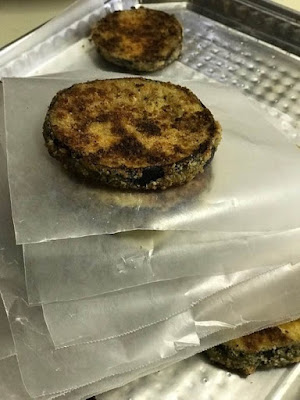 Misfits Market is a small Philadelphia-based operation that delivers to select regions in the Northeast (including my hometown of Buffalo, NY).  It is expanding its mission to even more states including Massachusetts, Rhode Island, Vermont, and New Hampshire – how exciting!

Interested in trying out Misfits Market?! Well, I highly recommend trying it out, if you can’t tell by now!  Use my referral code COOKWME-TH4OSJ to save on your first delivery!  There is no obligation and you can cancel anytime.  There is even an option to skip a delivery if a particular week doesn’t work out for whatever reason.  Like me, you can opt to get deliveries every other week.  I also chose a Friday delivery so that I can use the weekend to figure out what I’m going to do with the items I receive.  Many produce items freeze great, so that is always an option to keep in mind.  The prep work takes time, but I’ve been too excited to notice, turning on some music and getting to work with no issue.

Get started and join the misfit produce club!  😎 If you want to save 25% on your first box be sure to use my referral code

I hope you enjoy this subscription box as much as my family does!

Find posts for freebies, samples, and more this way!

Thank you for sharing!

Must-Have Items To Take On A Summer Outing

This site uses Akismet to reduce spam. Learn how your comment data is processed.

How to cash out of Savingstar before November 30th Shutdown

We use cookies on our website to give you the most relevant experience by remembering your preferences and repeat visits. By clicking “Accept”, you consent to the use of ALL the cookies.
Cookie settingsACCEPT
Manage consent

This website uses cookies to improve your experience while you navigate through the website. Out of these, the cookies that are categorized as necessary are stored on your browser as they are essential for the working of basic functionalities of the website. We also use third-party cookies that help us analyze and understand how you use this website. These cookies will be stored in your browser only with your consent. You also have the option to opt-out of these cookies. But opting out of some of these cookies may affect your browsing experience.
Necessary Always Enabled

Any cookies that may not be particularly necessary for the website to function and is used specifically to collect user personal data via analytics, ads, other embedded contents are termed as non-necessary cookies. It is mandatory to procure user consent prior to running these cookies on your website.